Dhrubesh Chandra Regmi is an exponent of the sitar from an illustrious musical family in Nepal. H 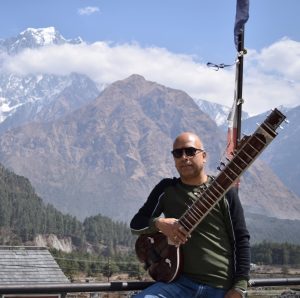 e is a Scholar, academician, and Sitar maestro and has been living a legacy of his predecessors. His great grandfather Dev Chandra Regmi is credited for pioneering sitar in Nepal. His grandfather Krishna Chandra Regmi was the recipient of the coveted Indra Rajya Laxmi Award for his contribution to Nepali music. The musical environment at home inculcated a deep interest in music in Dhrubesh’s mind and heart. Under the tutelage of his father Prof Satish Chandra Regmi, he honed his skills as he grew up and today he is a well-known face in the classical music industry.

Dhrubesh is the first musician to hold a Ph.D.. He was awarded a Doctor of Philosophy from Delhi University for his dissertation titled “History of music in Nepal with special reference to classical music during the Rana period.” As a Fulbright Visiting Scholar, Dhrubesh also completed his Post Doctorate and Artistic work on the theme of “Music for Peace and Harmony” at The Graduate Centre of the City University of New York.

Currently, he is the Professor at Padma Kanya Multiple Campus, Tribhuvan University. He is also a recipient of various prestigious awards and prizes. He has been also appointed “Goodwill Ambassador for Nepal Tourism Year 2011” by the Nepal Tourism Board of the Nepal Government.

Dhrubesh was born in Kathmandu, Nepal on September 16, 1962, in an illustrious musical family. He is the fourth child of Prof Satish Chandra Regmi and Sanubaba Regmi. His great grandfather, Pt. Dev Chandra Regmi, a founder of Regmi Sitar Gharana is also credited to popularize the sitar instrument in Nepal.

Music became a legacy of sorts in the Regmi family when his great grandfather’s two sons Krishna Chandra and Poorna Chandra as well as his father Satish Chandra took up music as their career and began playing the sitar professionally.  His grandfather Krishna Chandra Regmi was the recipient of the coveted Indra Rajya Laxmi Award for his contribution to Nepali music. His father Prof. Satish Chandra Regmi was also a renowned sitar player and musicologist who made a significant contribution to the development of sitar and music education in Nepal.

The musical environment at home inculcated a deep interest in music in Dhrubesh’s mind and heart. Under the tutelage of his father Prof Satish Chandra Regmi, he honed his skills in music as he grew up. As a child, Dhrubesh grew up listening to the music his father and grandfather played, which slowly built a longing in him to learn the sitar. By the age of eight, Dhrubesh has already gained the ability to play sitar in a systematic approach. At that time, due to his childish behavior, he was not serious and learning music was all rather playful for him. But eventually, he came around and developed a keen interest in music, and those moments of glory he experienced eventually led him to take a firm hold of his passion for classical music. At the age of 10, he performed the first concert of his life. This was the time when he even needed support to hold his instrument from some other people.

Dhrubesh took up law since Nepali society is all tied up in the fallacy that an educational degree is a must. Accordingly, he has achieved a Bachelor of Law (1985) and Certificate in Law (1981) from Tribhuvan University, Kathmandu. However, besides learning law and learning music from his father, simultaneously, as a private student, he was also achieving formal degrees in music education. He has a Junior Diploma, Senior Diploma and Sangit Prabhakar degree  from Kalanidhi Sangit Mahavidyalaya, Nepal, Board of Prayag Sangit Samitee, Allahabad, India.

In 1985, after completing his law degree, he received a cultural scholarship from Indian Council for Cultural Relation and went to India for his further studies in music. During his stay in India, he pursued a Master of Arts in Music from the Department of Fine Arts, the University of Delhi, India in 1988 and t Sangeet Alankar (Master of Music) from Gandharva Mahavidyalaya, Akhil Bharatiya Gandharva Mandal, New Delhi, India in 1987. Later on, in 1998, he was selected under the Faculty Development Program of TU to pursue Ph.D. in music. He was awarded a Doctor of Philosophy from Delhi University in 2004 for his dissertation titled “History of music in Nepal with special reference to classical music during the Rana period.” Dhrubesh is the first musician to hold a Ph.D. degree in music in Nepal. As Fulbright Visiting Scholar, Dhrubesh also completed his Post Doctorate and Artistic work in 2014 on the theme of “Music for Peace and Harmony” at The Graduate Centre of the City University of New York.

Dhrubesh feels very fortunate to have had lessons from the likes of Prof Anil Dhar and Pandit Binay Chandra Maudgalya (Bhaiji) in Delhi. Most importantly, he systematically studied sitar with the legendary maestro Pt. Uma Shankar Mishra under guru-shishya (master-disciple) tradition. For Dhrubesh music was not a far-fetched dream like it was for many others then. Having belonged to a family of musicians, his struggles and setbacks to fetch opportunities were limited. However, when he took himself as an individual who was a law graduate and a music teacher at an early age, he had his share of hardships to efficiently shoulder the responsibility that he was given. In 1989 when he professionally started his career in music, he was provided with many exposures abroad but he turned them down. As a growing artist, a life limited to a certain periphery was not pleasing to him since he had wanted to deeply explore the genre of classical music. At the beginning of his career, he chose law as his profession and music as a hobby. However, later, music became his profession and law a hobby. 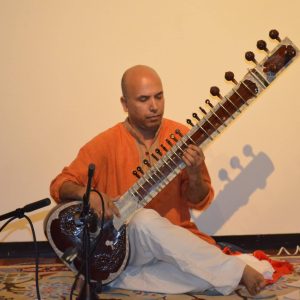 Currently, he is the Professor at Padma Kanya Multiple Campus, Tribhuvan University. Dhrubesh is affiliated in a different capacity with many professional organizations such as Vice President of Fulbright Alumni Association of Nepal, Founding President, Nepal Classical Music SocietyFounder and Sitarist of Sukarma (Redefining Nepali Folk and Classical Music), Life Member and Advisor of Kirateswor Sangeet Ashram, Executive Member- Kalanidhi Indira Sangeet Mahavidyalaya, Adviser and Members in many other organization.

Dhrubesh has performed on many occasions in Nepal and abroad. He has toured extensively performing both as a solo artist as well as a member of Sukarma. He has traveled to many countries including Austria, Bangladesh, Belgium, Brazil, China, Denmark, France, Germany, Hong Kong, India, Italy, Japan, Kyrgyzstan, Luxembourg, Malaysia, Mexico, Netherlands, Pakistan, South Korea, Switzerland, Thailand, United Kingdom and the United States of America among others. 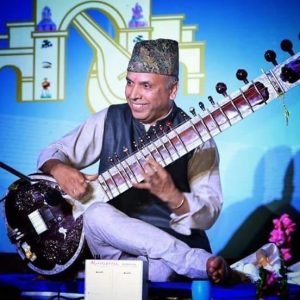 Regmi along with other musicians played tunes that whetted the souls of the audience in raptures of elation as they performed various raags including those that have been the identity of Regmi Gharana for generations, the musical offerings were greeted with intermittent bouts of ovation.

Dhrubesh is one of the founder members of the musical group ‘Sukarma’, which means good deeds figuratively defined by the music they perform. This is a folk and classical instrumental trio formed in 1997. Sukarma is the name, which has already won the hearts of the millions with its enchanting melody. The instrumental band is popular for their fusion of eastern classical and Nepali folk music and sometimes even with western music. As per the theme of music or concerts, the group plays combined melody of Sitar, Tabla, Madal, Sarangi, Flute, and other musical instruments. The group has established itself as a major presence and represented Nepali music in many countries. Today, it is one of Nepal’s most sought-after folk-classical groups, having released more than 15 albums. 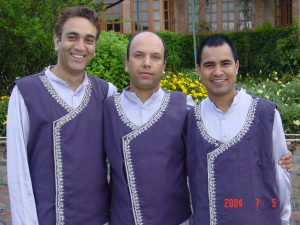 Sukarma has set its mission to popularize Nepali folk and classical music through the passion shared by all members of the group. The group originally consisted of three permanent members; Dr. Dhrubesh Chandra Regmi, late Atul Prasad Gautam, and Manose Singh. Together the trio created magic, so well received by the audience that fame came to the group in no time. Collectively the trio had traveled extensively in Nepal and many other parts of the world. After the migration of Manose to the USA, Shyam Nepali, a versatile sarangi player, and the after Atul’s sudden demise Pramod Upadhyaya, another young, talented, and versatile Tabla player joined the group. Sukarma’s music touches the heart of common men with the rendition of Nepali folk songs through their instruments. Music for them is not only the means to sustain their livelihood but it’s a way of life; a quest for inner beauty, love, and peace. 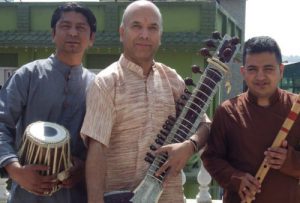 When Dhrubesh plays his sitar, his mind and soul mingle with almighty which produces soothing sound pleasing everybody who listens to it. Shyam contemplates while playing sarangi closing his eyes with a mild smile on his face as if he is talking to God. When Pramod’s fingers tremble on tabla, it produces a kind of sound together with sitar and sarangi that mesmerizes the audience.

Pursuing music in Nepal is not easy, and it took quite a while for the group to establish itself. However, once it ‘hit’ the masses, there was no looking back. The Nepal- based group became international overnight, visiting foreign countries and promoting Nepal and Nepali music. Although the band’s line-up has changed considerably since it was first formed in 1997(Regmi is the only still-remaining original member) it remains much loved and revered. Regmi believes Sukarma is more than a band. Band members may have changed over the years but the spirit of our music remains the same. 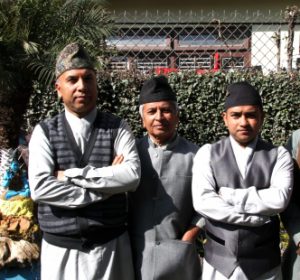 The group has given many performances in Nepal and abroad where audiences were mesmerized by the shifting melodies and moods. The team was often requested to play more which they often enjoyed. In 2012 Sukarma did a nationwide tour dubbed Ncell Sukarma Yatra. They traveled across nine districts of western Nepal.  The response received at that time was amazing. The tour was a great success as it managed to challenge the stereotype most people had of classical music.

He has published more than 18 audio-visual Compact discs. Some are listed below: 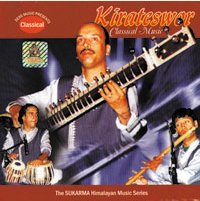 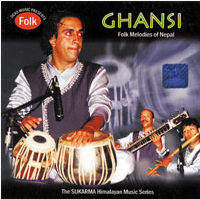 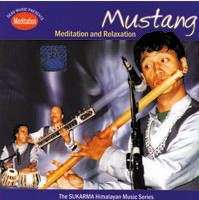 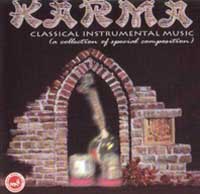 Dhrubesh is married to Sandhya Poudyal and has a daughter and son.